Actun Tunichil Muknal (the Cave of the Crystal Sepulchre), also known locally as ATM, is a cave near San Ignacio, Cayo District, notable as a Maya archaeological site that includes skeletons, ceramics, and stoneware. There are several areas with skeletal remains in the main chamber.

Many of the Maya artifacts and remains are completely calcified to the cave floor. The ceramics at the site are significant partly because they are marked with “kill holes”, which indicate that they were used for ceremonial purposes. One artifact, named the “Monkey Pot”, is one of just four of its type found in Central America. The Maya also modified cave formations here, in some instances to create altars for the offerings, in others to create silhouettes of faces and animals or to project a shadow image into the cave. The cave is extensively decorated with cave formations in the upper passages.

Actun Tunichil Muknal cave, was first entered by the Mayas in AD 300-600. It was not until the late AD 700-900 that the Mayas went deeper into the cave to perform their ceremonies. The cave was officially opened to the public in 1998.

The cave houses various types of artifacts from ceramics and stoneware to the remains of skeletons. The Mayas consider Actun Tunichil Muknal a highly sacred location, enclosing the famous “Crystal Maiden,” who was thought to be a sacrifice victim. After decades of weathering and natural processes, the surface of the skeleton appears to be covered with a geological sanded finish, which gives the maiden a somewhat magical fairy-dust appearance. 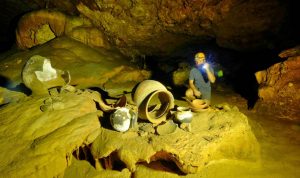 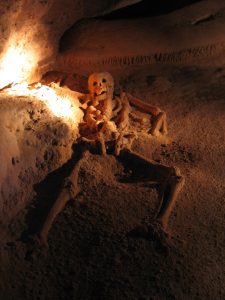