Altun Ha is located 31 miles north of Belize City on the Old Northern Highway where a two-mile dirt road connects the main road to the site. The area around the Altun Ha is rich in wildlife including crocodiles that inhabit the Maya-made water reservoir at Altun Ha.

Once home to as many as 10,000 residents over a 1,000 year-long period of occupation dating back as early as 200BC, Altun Ha formed part of a unique cultural zone along with other coastal sites. Close to the Caribbean Sea, Altun Ha was an affluent ceremonial center boasting two main plazas, thirteen structures (including the Temple of Sun God or the Temple of the Masonry Altars) that were occupied as recent as the 10th century. The discovery of rich tombs indicates that the ruling elite relished access to considerable amounts of exotic goods. Plaza A, the larger of the two, is the site of a mysterious tomb discovered beneath one of the temples called the “Temple of the Green Tomb” where jade, jewelry, flints and skins were among the hundreds of diverse remnants unearthed there.

Adjoined to the larger Plaza A, Plaza B is home to the largest temple at the site and the most renown Mayan temple in all of Belize, the “Temple of the Masonry Altars”, which rises 54 feet above the Plaza floor. A single stairway climbs the largest temple to an altar perched at the peak which is believed to be used for majority of the community’s religious ceremonies. Inside, several tombs were revealed that are believed to have kept the bodies of Altun Ha’s high priests who was buried with the famed Jade Head. Because three of the seven priestly tombs in the Temple of the Masonry Altars were plundered, having their contents destroyed and the crypts filled with soil, researchers believe that the final demise of Altun Ha was perhaps brought about by violent peasant revolt.

The true name of “Altun Ha” remains unknown, it is a rough translation to “Rockstone Pond” which signifies the presence of one of the most interesting finds of any Maya site; a Mayan made water reservoir that is lined at the bottom with limestone clay giving the bottom the firmness needed to retain water. 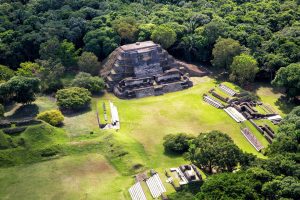 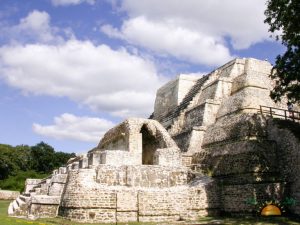 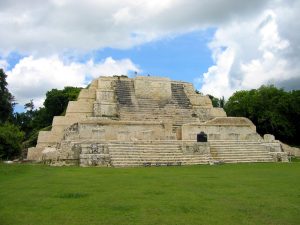