Climate patterns began to change in most parts of the world around 7000 BC. Wetter and warmer weather began to melt the ice glaciers in the north and the Paleo-Indian period gradually drew to an end. Along with these major environmental changes many of the large animals that once flourished in the Americas began their decline and eventual extinction.

The climatic challenges at the end of the Paleo-Indian period also affected the human population significantly. People began to rely more and more on plants and smaller animals for food, due to the depletion of their principal food supply which was large animals. These challenges brought about the next phase in human development, referred to as the Archaic period. This phase begins roughly around 7000 BC and ended with the formation of early Maya culture around 3000-2000 BC.

Climatic changes in the Archaic period resulted in the invention of new tools for use in the exploitation of a wider variety of resources for sustenance. Large stone bowls and pestles, and smaller, but wider, projectile points were among the most used tools during the Archaic times to hunt small animals. The bowls and pestles are similar to the manos and metates that were later used by the Maya for grinding and processing plant food.

The best evidence for Archaic human activity in Mesoamerica was recovered by archaeologists working in the Tehuacan Valley of Mexico. They noted that after the end of the Paleo era, people began to collect and eat a variety of plants such as peppers, squash, avocado and early forms of corn. Much of this food was carried by Archaic people to their rock shelter campsites in bags that were woven from plant fibers. Many of the plants originally collected by these people were eventually domesticated, this led to the establishment of the first permanent settlements.

Evidence of Archaic human activity in Belize is only slightly better than the Paleo period. In most cases too, this evidence is limited to the diagnostic projectile points left behind by these nomadic people. The first Archaic period artifact reported in Belize was discovered in the 1980s near the Lowe Ranch to the north of Ladyville Because of this archaeologists in Belize refer to them as Lowe points. Up until 1999 about twelve Lowe points had been recovered in the Belize, Orange Walk and Corozal Districts. Between 2000 and 2005 several more points were discovered in the Cayo District: in San Ignacio, near Spanish Lookout, in the Roaring River area, the Caves Branch River Valley, Calla Creek and the Mountain Pine Ridge. 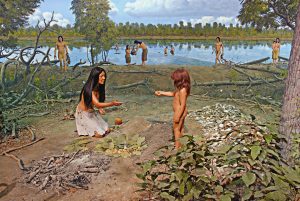