Barton Creek Cave is a 45 minute drive from San Ignacio town. The cave is a part of a large river system and one of the longest subterranean sites in the country of Belize. Mayan ceremonial remains, however, have only been found within the first kilometer from the entrance. This kilometer long space contains ten ledges above the river with evidence of ancient Maya activity. The first ledge is located on the left just inside the entrance to the cave, and continues to roughly 30 meters beyond the Maya Bridge that straddles the river.

Approximately 1800 years ago the Maya began utilizing the cave ledges for ritual activity. The ceramics that have been found suggest that the Maya were using Barton Creek Cave from the Early Classic (A.D 200 to 600) to the Late Classic Period (A.D. 600 to 900). This is typical of caves in this area, however at this site Early Classic material is found farther into the cave than at other sites. The reason for this may simply be that the Maya moved into the Barton Creek Valley earlier than into other areas such as the Roaring Creek Valley.

A large number of hearths were discovered throughout Barton Creek cave. These features are identified by a light-gray ash lens with flecks or fragments of charcoal. Typically these features were found against the walls or near the drop to the river. Little evidence of cooking has been found associated with these hearths suggesting that the predominant function of the hearths was to provide light, or for the burning of copal incense and other offerings.

The remains of at least 28 individuals were found within Barton Creek Cave. These individuals range in age from young children to older adults. One of the biggest questions regarding these human remains is whether or not they represent victims of sacrifice. At this point, this question cannot be answered conclusively. The number of children’s remains supports the argument for sacrifice. It is known that the Maya often sacrificed children to the rain god Chac, who the Maya believed to have resided in caves. Other individuals found, such as an older adult female, who suffered from disease, seem unlikely candidates for sacrificial offering. This suggests that perhaps some individuals were placed in the cave as a form of ancestor worship. 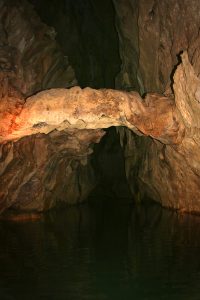 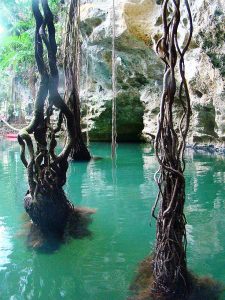