Caracol is located 25 miles south of San Ignacio. The Caracol area was occupied as early as 1200 BC, yet occupation in the epicentral area was no earlier than 650 BC and lasted no later than AD 950. Caracol boasts 53 carved stone monuments (25 stelae and 28 altars), and more than 250 burials and 200 caches.

By the Early Classic (between AD 250 and 550) Caracol was tied into extensive trade networks and pan-lowland ideological systems,leading to a unified regional economy The Caracol was officially founded in AD 331 by Te’ K’ab Chaak. A Teotihuacan style cremation of three individuals dates precisely to this period, indicating early influences from northern Mexico
Beginning in AD 636, there was a building boom at Caracol at the conclusion of the Tikal-Naranjo wars. Entering the Late Classic period, the site still demonstrated widespread cohesion. During this time Caracol also had a unique burial pattern, focusing on multiple burials in special chambers. This pattern is seen spreading out through the Peten region likely controlled by Caracol, although this spread is independent of other material cultural indicators (like caching practices). K’an II commissioned more monuments than any other ruler, and ushered in the ‘golden age’ of Caracol.

Lasting from AD 702 (Stela 21) to 798 (Ballcourt Marker 3), this period lacks any hieroglyphic texts. Archaeologically however, this period is correlated with an increase in site-wide prosperity. After the AD 798 date, the site core is still prosperous, yet shows less cohesion between the center and outlying areas.

Warfare event credited to K’inich Joy K’awil on Stela 11 (erected AD 800), indicating the capture of eight captives; then in 800 CE, K’inich Joy K’awiil captured the lord of Ucanal. Caana was also refinished during this period.

K’inich Toobil Yopaat’s accession date is not certain (c. AD 804), but he erected five (possibly six) monuments, and seems to have repaired relations with Ucanal. In AD 820, he enacted an axe event against Tikal.

Collapse
Evidence suggests that Caracol weathered the initial part of the Maya collapse.Through symbolic egalitarianism, it seems that the majority of the Late Classic population had access to ‘elite’ material goods. However, the transition to the Terminal Classic sees a shift away from symbolic egalitarianism, when the elite developed their own ceramic traditions and had access to goods no longer available to the populace.

The last recorded date at Caracol is AD 859 – 10.1.10.0.0, on Stele 10. Caana’s abandonment dates to approximately AD 900; several other structures have occupation that dates to the Terminal Classic period. Structure A6 was abandoned in AD 1050, and marks the final abandonment of the site. 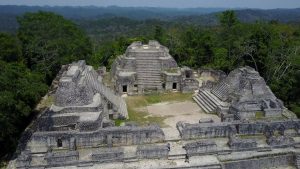 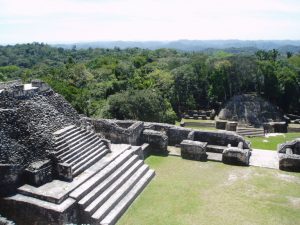