Ancient Maya cuisine was varied and extensive. Many different types of resources were consumed, including maritime, flora, and fauna material, and food was obtained or produced through a host of strategies, such as hunting, foraging, and large-scale agricultural production. Plant domestication focused on several core foods, the most important of which was maize or corn.

Much of the Maya food supply was grown in agricultural fields and forest gardens, known as pet kot. The system takes its name from the low wall of stones (pet meaning “circular” and kot “wall of loose stones”) that characteristically surrounds the gardens.

The Maya adopted a number of adaptive techniques that, if necessary, allowed for the clear-cutting of land and re-infused the soil with nutrients. Among these was slash-and-burn, or swidden, agriculture, a technique that cleared and temporarily fertilized the area. For example, the introduction of ash into the soil raises the soil’s pH, which in turn raises the content of a variety of nutrients, especially phosphorus, for a short period of time of around two years. However, the soil will not remain suitable for planting for as many as ten years. This technique, common throughout the Maya area, is still practiced today in the Maya region. Complementing swidden techniques were crop rotation and farming, employed to maintain soil viability and increase the variety of crops.

To completely understand how and in what quantities food resources were relied upon by the Ancient Maya, stable isotopic analysis has been utilized. This method allows for the stable carbon and nitrogen isotopes to be chemically extracted from animal and human skeletal remains. These elements are then run through a mass spectrometer and the values display the enrichment of maize and the extent of aquatic resources in an individual’s diet.

Varieties of maize
Paleoethnobotanical studies consist of the examination of micro and macro plant remains found within measured units of soil taken from an archaeological context.Macro-remains are separated from the soil through a flotation process while microremains are chemically extracted from the flotation samples. The earliest archaeological plant remains within the Maya region are from Cuello, Belize, and predate Preclassic sites. The majority of plant remains fall within the Preclassic-Postclassic and allow for researchers to discuss subsistence patterns that revolve around domesticated and wild/partially cultivated plants. Information for the Classic period, the most widely studied period for the Maya, come from the sites of Cobá, Cerén, Dos Pilas, Wild Cane Cay, Copán, Tikal, and Río Azul. This range of sites also allows for insight into regional differences based on the environment and access to local resources, such as aquatic and marine life.

Maya diet focused on four domesticated crops (staple crops): maize, squash, beans (typically Phaseolus vulgaris) and chili peppers. The first three cultivars are commonly referred to in North America as the “Three Sisters” and, when incorporated in a diet, complement one another in providing necessary nutrients. Among the three, maize was the central component of the diet of the ancient Maya, and figured prominently in Maya mythology and ideology. Archaeological evidence suggest that Chapalote-Nal-Tel was the dominant species, however it is likely others were being exploited also. Maize was used and eaten in a variety of ways, but was always nixtamalized. Nixtamalization (a term that derives from the Nahuatl word for the process) is a procedure in which maize is soaked and cooked in an alkaline solution. This releases niacin, a necessary B vitamin (vitamin B3) that prevents pellagra and reduces incidents of protein deficiency.

Once nixtamalized, maize was typically ground up on a metate and prepared in a number of ways. Tortillas, cooked on a comal and used to wrap other foods (meat, beans, etc.), were common and are perhaps the best-known pre-Columbian Mesoamerican food. Tamales consist of corn dough, often containing a filling, that are wrapped in a corn husk and steam-cooked. Both atole and pozole were liquid-based gruel-like dishes that were made by mixing ground maize (hominy) with water, with atole being denser and used as a drinking source and pozole having complete big grains of maize incorporated into a turkey broth. Though these dishes could be consumed plain, other ingredients were added to diversify flavor, including chili peppers, cacao, wild onions and salt.

Along with maize, beans—both domestic and wild—and squash were relied on as evident from the remains at Ceren, El Salvador, the Mesoamerican Pompeii.

An alternative view is that manioc cassava was the easily grown staple crop of the Maya and that maize was revered because it was prestigious and harder to grow. This proposal was based on the inability of maize to meet the nutritional needs of densely populated Maya areas. Manioc can meet those needs. Because tuberous manioc rarely survives in the archaeological record, evidence for this view has been lacking, although recent finds in volcanic ash at the southern Maya site of Joya de Cerén in El Salvador may be such evidence. 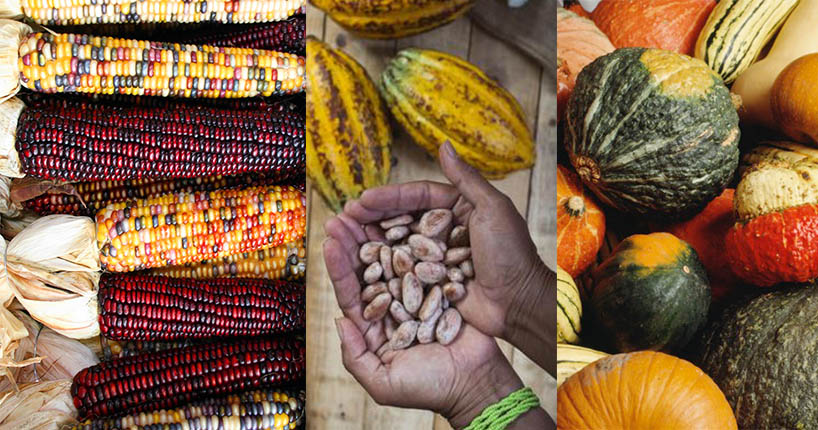 Previous: Belize Spanish Conquest and its Aftermath
Next: Clothing