The Jade Head is the largest piece of carved jade yet found in Mesoamerica. The Jade Head weighs 4.42kg and measures 15cm tall with a circumference of 46cm. It features a bird-like beak which dipicts the Sun God, Kinich Ahua, who in some legends descends to the earth each day as a macaw.

The burial was found which approximately dates to 600-650AD at Altun Ha in 1968. Inside the tomb rested the fragmentary remains of an adult male, who would have stood approximately 170cm tall. Among his grave goods were ceramic bowls, shell beads, jadeite anklets, bracelets and beads, pearls, pyrite and haematite artifacts. The Jade Head was placed upon the pelvis facing toward the skull. Due to the value of the goods and their religious significance, it is almost certain that the tomb is that of a chief, lord, or high priest. The fragmentary remains suggest that this was a powerful ancestor who was entombed within the temple as a relic to harness his supernatural powers. The Jade Head’s association with K’inich Ajaw has led to a theory that the priest or lord was associated with the Sun God and that Structure was therefore dedicated to the Sun God. 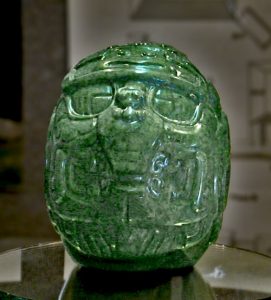 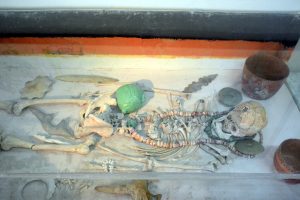