Nim Li Punit is a small site in the Toledo District where the Jade Pendant was found in May of 2015. Nim Li Punit is estimated to have been inhabited between A.D. 150 and 850.

A team of graduate students, along with a crew of local people, were excavating a palace built around the year 400 when they found a collapsed, but intact, tomb. Inside the tomb, which dates to about A.D. 800, were 25 pottery vessels, a large stone that had been flaked into the shape of a deity and the precious jade pectoral. Except for a couple of teeth, there were no human remains.

The jade pendant was worn on a king’s chest during key religious ceremonies. It is now housed at the Central Bank of Belize, along with other national treasures.

The pendant is significant for being the second largest Mayan carved jade found in Belize to date. The pendant measures 7.4 inches wide, 4.1 inches high and just 0.3 inches thick. What makes the pendant even more remarkable, are the carvings on the back of the pendant, 30 hieroglyphs about its first owner. 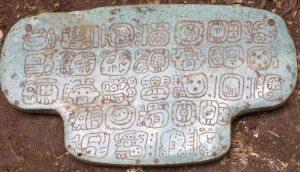