Ka’kabish was founded in the Middle Formative period the city flourished into the Early Classic period. From its founding, Ka’kabish was an active participant in inter-regional and regional trade networks, and caches of jade and marine shell beads associated with a burial dating to the Middle Formative period were discovered deep beneath the main plaza .

Ka’kabish continued to flourish throughout the Early Classic, with many of our structures being built or refurbished during this period. Excavations have revealed that large quantities of obsidian (and important long-distance trade good) were used in the construction of tombs around the center. We also have recovered ceramic tomb vessels showing strong stylistic ties to the Central Petén.

At the end of the Early Classic period monumental construction at Ka’kabish appears to have ceased completely, only to resume during the Terminal Classic period. The hiatus coincides with the erection of Stela 9 at Lamanai, on which the ruler declares himself Kaloomte’ (Overlord) of the region , while the resumption of activity at Ka’kabish correlates to the destruction of this monument . That the individual depicted wears a headdress associated with military success suggests that the hiatus at Ka’kabish may have been the result of a military conquest and its revitalisation also may have been the result of violent action. Competition and warfare, likely fueled by rising populations, environmental degradation, droughts, or combinations thereof, is known to have intensified in the Terminal Classic period (ca. AD 830-950), leading to the cessation of many of the features that characterised the Classic Period (e.g., writing and divine kingship). Long-distance trade networks were also disrupted and reoriented as a result of the decline of the Central Petén centres. 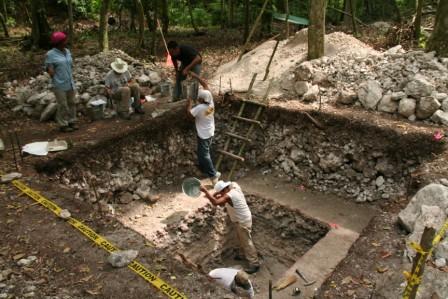