K’axob is a Mayan archaeological site located in Orange Walk, Belize. K’axob was occupied from about 800 B.C. to A.D. 900. The site is located in the northern wetlands of Pulltrouser Swamp near the Sibun River Valley in central Belize.

There are many burials at the site that illustrate the ritualistic aspects and social stratification at K’axob. Many of the individuals, some more than others, were interned with beads made of shell as well as ceramic vessels, demonstrating this potential social stratification. The pottery vessels recovered from the site demonstrates regularity in the production of pottery.

The most prominent type of ceramic vessels recovered from the site were ‘serving bowls,’ with a tripodal base, and were present during the Early Classic Period. There is also evidence of specialized areas for pottery production. There are middens at the site that yielded a great deal of pottery sherds and are associated with structures that are believed to be kilns as well as with tools similar to modern pottery making tools. There is also some evidence of stone tool production at the site. The most common stone tool recovered from the site is a chert oval biface and is associated with agriculture and thought to have been used for weeding and hoeing.
https://en.wikipedia.org/wiki/K%27axob 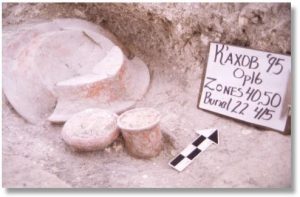