Lubantuun is a late Classic ceremonial center dated to 700-900 AD which is noted for its unusual style of construction distinctive of southern Belize. The large pyramids and residences are made of stone blocks with no mortar binding them together. The buildings on top of the pyramids were made from perishable materials rather than masonry and hence do not remain. The name is Maya for “Place of Fallen Stones.”

Eleven large structures tower above five main plazas and three ball courts. Unlike most other Maya ceremonial sites, the existing structures are solid and have no doorways. Another unique feature not found in other sites around the region is the rounded corners on the structures. Since no corbeled arches exist at the top of these structures, it is believed that perishable materials such as wood and thatch, were used to build superstructures on top of these pyramids.

Lubantuun is believed to have been an administrative, religious, political, and commercial center, mainly used for occasional festivals, ball games, and other sacred ceremonies. Although no stele were found here, the site is well-known for its abundance of ceramic whistle figurines. Entrance to the site A few burial tombs are also present. 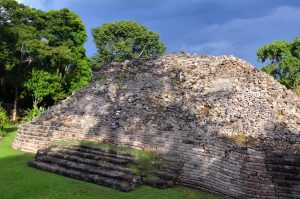 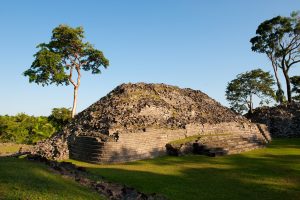 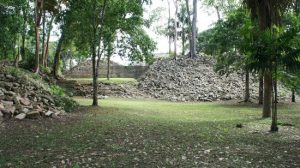