Archaeologists found this mask in a tomb (Burial B1-2) at the Cahal Pech site, Cayo. During ceremonies, royalty wore masks on their belts or chests. This deified-ancestor mask linked its owner to the gods, vividly illustrating his power.

Burial B1-2 was discovered by Peter Schmidt in 1969, the burial was placed in a large tomb located approximately 1 meter east of Burial B1- 8 at the summit of Str. B1. The tomb contained the remains of a single adult male individual. Schmidt’s illustration of the burial indicates that the individual was lying in an extended position but the lack of a north arrow makes it impossible to determine the skeleton’s orientation.

Burial B1-2 was accompanied by sumptuous grave goods. Above the pelvis was the beautiful jade and shell mosaic mask. Other polished stone objects included six jade beads, six jade ear flares, a perforated jade tube, and three jade celts. The tube and celts are similar to those found in Burial B1-B7. Two additional mosaic masks, made predominantly from shell with a couple pieces of jade, were located just below the skull and several obsidian blades were placed near the feet of the individual. Ceramic artifacts included eight pottery vessels. Six of the vessels were polychrome and two were monochrome. One of the vessels, a Saxche Ceramic Group cream polychrome, is chaliced-shaped and depicts an individual in the act of blood-letting from his penis. Another vessel, a basal flanged bowl, is a Dos Arroyos Orange polychrome. There is also a fluted vase that is similar in form and stylistic treatment to the fluted vase from Burial B1-7. These, and other, similarities between B1-2 and B1-7 suggest an almost coeval date for the two burials with, perhaps, B1-7 predating B1-2 by a few years at most. 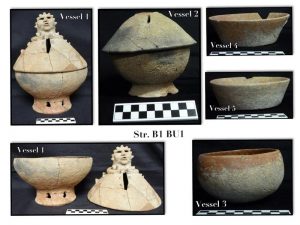 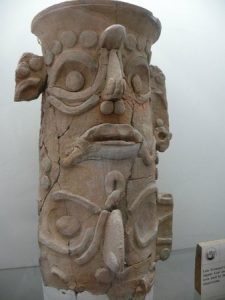 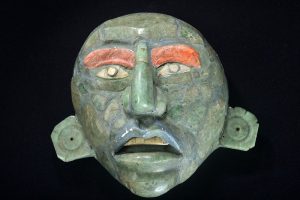