Nim Li Punit is a Maya Classic Period site in the Toledo District, located 40 kilometres north of the town of Punta Gorda. Nim Li Punit is sometimes known as Big Hat or Top Hat; the name is Kekchi Maya for “Big Hat”, referring to the large elaborate head-dress on a stela sculpture found on site depicting one of the site’s ancient kings.

Nim Li Punit is a medium-sized site from the Maya Classic Period, flourishing from the 5th century AD through the 8th century AD. It consists of structures around three plazas, including several step-pyramids, the tallest being 12.2 meters high. The site has a number of carved stelae illustrating the ancient city’s rulers. Several stelae are in an unfinished state, suggesting a sudden halt to work. The site is near Belize’s Southern Highway and is open to visitors subject to an admission charge.
The peak population of Nim Li Punit is estimated to have been in the range of 5000 to 7000 people during the peak occupation Late Classic period. Early occupiers of this site probably migrated from Guatemala, similar to the history of nearby Lubaantun. The peoples of Nim Li Punit are thought to have spoken a dialect of the Cholan language, which is that spoken in the Mayan heartland. Evidence from carved stelae document the site was active in the period 721 to 790 AD, based upon actual Mayan calendar dates inscribed on at least six different stones. As at many other Mayan sites occupation of Nim Li Punit ceased rather suddenly in the 9th century AD, probably associated with area wide overpopulation exceeding the region’s carrying capacity of the then prevalent milpa farming system. The Nim Li Punit population is thought to have been aligned with Mayan settlements such as Tikal in the Petén Basin region of Guatemala. The visitors’ center indicates that this site had political and social connections with Copan in Honduras.
https://en.wikipedia.org/wiki/Nim_Li_Punit 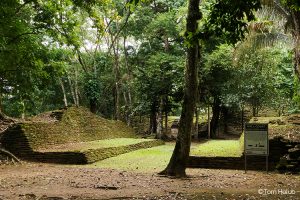 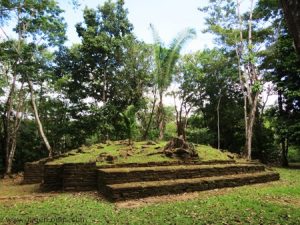