Paleo-Indians is a term given to the first peoples who entered and inhabited the Americas during the final glacial episodes of the late Pleistocene period.

This period marks the first colonization of the New Word. Scientists believe that the Paleo-Indians may have followed herds of large animals as they crossed the Bering land bridge from north Asia to the Americas. The formation of huge glaciers and ice sheets which caused water levels to drop more than 150 feet below their present level created a bridge known as the Bering Strait. As water levels fell the Aleutian Islands, which spread across the Bering Strait, would have been joined together, linking Asia to America.

Paleo-Indians in the Yucatan Peninsula, lived a nomadic way of life. They did not live in permanent villages; consequently they left few clues or artifacts that can assist us with determining many aspects of their cultural lifestyles.

The few campsites that have been found suggest that they had few material objects. Stone tools, particularly projectile points and scrapers, are the primary evidence of the earliest human activity in the Americas. Crafted lithic flaked tools are used by archaeologists and anthropologists to classify cultural periods. Their most important hunting implement was a fluted projectile point that is generally referred to as a Clovis point.

In the early 1960s Following Hurricane Hattie, farmers near Santa Familia, Cayo District, discovered two large bones that were later identified as those of an extinct (Pleistocene age) giant sloth. This marked the first indication of Paleo-Indian occupation in Belize was discovered.

Cut marks on the bones suggested that the animal may have been killed by hunters. Then later in the mid 1980s, convincing evidence of Paleo-Indian presence in Belize was recovered. A farmer near Ladyville discovered the first fluted projectile point in the country. A second Paleo-Indian projectile point was found a few years later by a farmer in the Toledo district in his corn field. Since then, teeth of an extinct mastodon were discovered in Bullet Tree Falls and simple stone tools associated with the remains of extinct horse and cave bear were recovered in a rock shelter at Actun Halal, in the Cayo District. This conclusive evidence tells us that early humans gathered edible plants and hunted along the open savannas and river valleys of Belize. 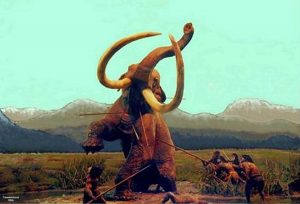