The Preclassic, also known in greater Mesoamerica as the Formative, has been divided into three logical time periods, the Early, Middle and Late. The earliest Maya came into the Belize and adjacent tropical lowland areas as farmers before 2000 BC but did not appear in the archaeological record for nearly a millennium. 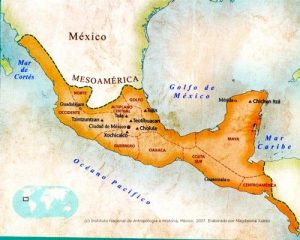 The roots of Maya civilization remain unclear, although it is known that sometimes between the end of the Archaic period and Early Preclassic some of the first agricultural communities were established in the Mayan lowlands. Analysis of bones from early Maya grave sites indicate that, although corn had already become a major component of the diet by this time, fish and meat from game animals, along with other hunted or gathered foods still made up a major component of the diet. In addition to the gradual development of agriculture, basic forms of pottery began to appear, with simple designs and some slipped vessels. Around this time, the Olmec culture began to emerge in nearby Tabasco, granting the early Maya an important trading partner and beginning a period of prolonged contact that would have profound effects on Maya society. 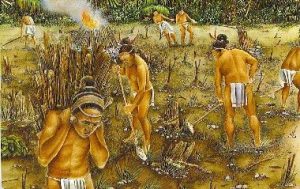 By around the year 1000 BC, centuries of agricultural village life had begun to form the beginnings of a complex society. Prestige goods such as obsidian mirrors and jade mosaics began to appear, increasing the demand for more extensive trade. Canals and irrigation schemes demanding coordinated human effort began to appear with increasing complexity and scale. Gradually, villages began to include central plazas and earthen mounds, occasionally enhanced by masonry. For instance, the site of La Blanca featured a central mound more than seventy-five feet tall and contained a masonry fragment strongly resembling a head in the distinctive Olmec style. Carved stone stele also began to appear during this period, adorned with portraits of rulers but still devoid of writing. Warfare appears to have intensified during this period, as evidenced by advanced weaponry, rulers beginning to be portrayed as warriors, and the appearance of mass graves and decapitated skeletons.

Beginning around 900 BC, the Pacific coastal region fell under the dominance of the La Blanca statelet, which collapsed around 600BC, to be replaced by a polity centered on the El Ujuxte site. Another early statelet was probably based at the site of Chalchuapa, a town with extensive earthen mounds arranged around several plazas. However, it was likely ruled by the first true Maya city-state, Kaminaljuyu. Lying within modern-day Guatemala City on the shores of Lake Miraflores, Kaminaljuyu developed a powerful government structure that organized massive irrigation campaigns and built numerous intricately carved stone monuments to its rulers. These monuments clearly depict war captives and often show the rulers holding weapons, indicating the Kaminaljuyu polity engaged in active warfare, dominating the Guatemalan highlands for centuries. Kaminaljuyu’s main export was the essential resource obsidian, a beautiful volcanic glass that easily fractured into sharp edges, providing arrowheads, knives, and other weapons as well as prestige goods like mirrors.

Although it is difficult to firmly identify the ethnicity of a people from meager archeological remains, it appears that during this period the Maya began a systematic northward expansion, occupying the Petén Basin where such cities as El Mirador, Tikal, Calakmul, and Tayasal would be built. The dominant site of these early colonists was Nakbe in the El Mirador basin, where the first attested Maya ballcourt and sacbeob (stone causeways) were built. The rulers of Nakbe constructed several stone platforms and erected intricately carved stone and stucco monuments.

During this period, the Olmec culture reached its zenith, centered on the capital of La Venta in modern-day Tabasco near the early Maya centers. Speakers of a Mixe–Zoquean language, the Olmec are generally recognized as the first true civilization in the Americas. Their capital city of La Venta contains extensive earthworks and stone monuments, including several of the distinctive Olmec stone heads. The Olmec share several features with later Maya culture, including extensive jaguar-worship, a diet dominated by maize, and the use of the cacao plant. Several words entered Mayan from a Mixe–Zoquean language, presumably due to Olmec influence. Many of these borrowings relate to prestige concepts and high culture,indicating that the Middle Preclassic Maya were deeply impressed and influenced by their northwestern neighbors.
https://en.wikipedia.org/wiki/Preclassic_Maya 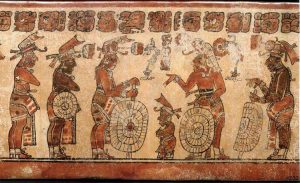 During the Late Preclassic period, the Maya population increased, many new sites were founded and those were established continued to develop. Increase trade fostered contact with other communities and new ideas were consistently exchanged from region to region.

Previously it was assumed that maya civilization was a product of the Classic period. Today this view has changed and we now know that all the major achievement of the ancient maya civilization were in place prior to the commencement of the Christian era. Characteristic features of the Late Preclassic Maya culture implemented the use of mathematics, calendrics and writing. It is during this time we first began to see the production of carved monuments.