Santa Rita is located on the outskirts of Corozal Town. Santa Rita was probably the ancient coastal trading city known as Chetumal during the Late Post-Classic Period.
In ancient times the Maya occupied parts of Mexico, all of Belize, Guatemala, El Salvador and parts of Honduras. Maya borders did not follow the political boundaries of today. Just prior to Spanish conquest, the northern part of one Mayan province lay in what is today’s Quintana Roo (Mexico); the southern part was in Belize, with the southern extremes including Guinea Grass and Northern River. Ancient Maya Chetumal was not today’s Mexican Chetumal, but what is now Santa Rita on the outskirts of Corozal Town. Ancient Chetumal, wealthy because of the large production of cacao and honey, ruled the areas on both sides of the Rio Hondo. 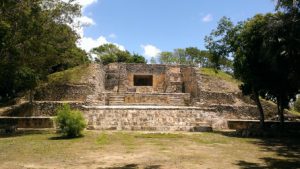 Previous: Gods and Goddesses
Next: Cerro