Home » The spanish conquest and its aftermath

In 1511, a Spanish caravel was wrecked in the Caribbean, and about a dozen survivors made landfall on the coast of Yucatán. They were seized by a Maya lord, and most were sacrificed, although two managed to escape. From 1517 to 1519, three separate Spanish expeditions explored the Yucatán coast, and engaged in a number of battles with the Maya inhabitants. After the Aztec capital Tenochtitlan fell to the Spanish in 1521, Hernán Cortés despatched Pedro de Alvarado to Guatemala with 180 cavalry, 300 infantry, 4 cannons, and thousands of allied warriors from central Mexico; they arrived in Soconusco in 1523. The K’iche’ capital, Q’umarkaj, fell to Alvarado in 1524. Shortly afterwards, the Spanish were invited as allies into Iximche, the capital city of the Kaqchikel Maya. Good relations did not last, due to excessive Spanish demands for gold as tribute, and the city was abandoned a few months later. This was followed by the fall of Zaculeu, the Mam Maya capital, in 1525. Francisco de Montejo and his son, Francisco de Montejo the Younger, launched a lengthy series of campaigns against the polities of the Yucatán Peninsula in 1527, and finally completed the conquest of the northern portion of the peninsula in 1546. This left only the Maya kingdoms of the Petén Basin independent. In 1697, Martín de Ursúa launched an assault upon the Itza capital Nojpetén and the last remaining independent Maya city fell to the Spanish. 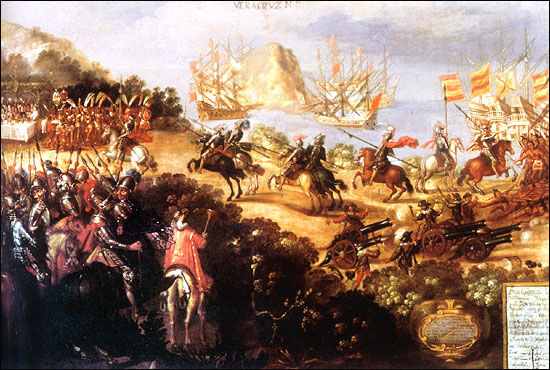