Xunantunich is an Ancient Maya archaeological site in western Belize, about 70 miles west of Belize City, in the Cayo District. Xunantunich is located atop a ridge above the Mopan River, well within sight of the Guatemala border – which is a mere 1 kilometre to the west. It served as a Maya civic ceremonial center in the Late and Terminal Classic periods to the Belize Valley region. Xunantunich’s name means “Sculpture of Lady” in the Maya language and, like many names given to Maya archaeological sites, is a modern name; the ancient name is currently unknown.

El Castillo pyramid (Structure A6) at Xunantunich is the second tallest structure in Belize, standing approximaitely 130 feet tall. El Castillo is the center of the site. Evidence of construction suggests the temple was built in two stages (the earlier named Structure A-6-2nd, which dates to around 800 AD, and the later Structure A-6-1st). Structure A-6-2nd had three doorways, whereas Structure A-6-1st only had doors on the north and south. The pyramid lays underneath a series of terraces. The fine stucco or “friezes” are located on the final stage. The northern and southern friezes have eroded, and the others were covered during the reconstruction and over time. There is a plaster mold on the Eastern wall frieze. The frieze depicts many things. Each section of the frieze is broken up by framing bands of plaited cloth or twisted cords (which represent celestial phenomena). The frieze depicts the birth of a god associated with the royal family, gods of creation, as well as the tree of life (which extends from the underworld, the earth, and the heavens). 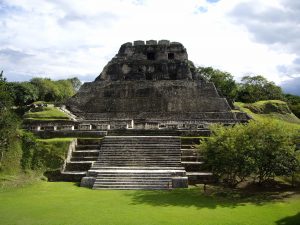 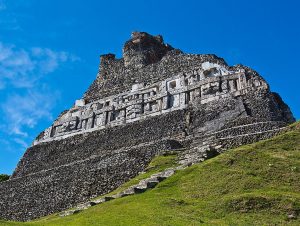